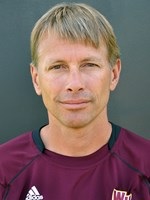 Spencer Smith is entering his seventh year as Head Coach of the Winthrop Women’s Soccer team. He came to WU after coaching at Radford University, North Carolina Wesleyan College and Lincoln Memorial University on the men’s side.

Since joining the Eagles in 2010, Smith has helped guide Winthrop to two Regular Season titles (2010, 2011) and a tournament runner-up in 2012. During his six years the Lady Eagles have compiled 56 wins which is most in program history and Smith has won 31 conference games, also most by any coach in the programs history.

Since arriving in Rock Hill in 2010, Smith has coached at Discoveries Soccer Club both on the girls and boys side. His u-17 girls team appeared in the South Carolina State Cup Semi-Final and eventually earned a spot into USYSA Region III.

Smith, who holds a NSCAA Premier diploma, is married to wife Julie. They have three children; Alyssa, Landon, and Merric. 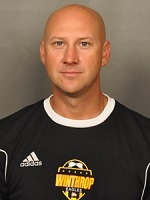 Daniel Ridenhour was named head men's soccer coach on Dec. 17, 2015 after completing his 12th season on the coaching staff, including the past seven years as the associate head coach.  He came to Winthrop after spending three seasons at Georgia State as an assistant coach. Ridenhour succeeds Rich Posipanko, who retired after 27 years at the Winthrop helm.

During his time with the Eagles, Ridenhour has helped the program capture five Big South Conference championships and five trips to the NCAA College Cup. The Eagles have amassed 141 wins since Ridenhour’s arrival in 2003.

While at Georgia State he worked as an assistant coach for the Georgia Boys Olympic Development Program. His 87 Georgia ODP State team won the 2004 ODP Region Championship and went to National Championship in 2005.

Ridenhour played his college soccer at Old Dominion University. He was a four-year letterman and a team captain in 2000. He graduated from ODU with a Bachelor of Science in Sport Management and a minor in Business Management.

Currently, Ridenhour coaches the Discoveries Soccer Club u-16 Green team. Prior to DSC, he coached at Charlotte United for 4 years. He has been a mainstay in the local club system for the past 12 years. Ridenhour holds a USSF “A” license.

He is married to wife Emily and resides in Rock Hill, SC with their two daughters, Phoebe and Winnie Alewine, and sons Paco Roo and Captain.

Winthrop head women's soccer coach Spencer Smith announced the hiring of Will Clark as an assistant coach in July of 2022.

Clark joins the Eagles after spending the previous season as an assistant coach for the University of North Carolina at Asheville.

"I am grateful for the opportunity to continue my coaching career at Winthrop University and to serve as the assistant coach for the women's soccer program," said Clark. "I would like to thank my former head coaches, Lindsay Vera, Emily Grant, and Andy McNab for their guidance during my time under their leadership. I would also like to thank the head women's soccer coach Spencer Smith and the rest of the hiring committee for this special opportunity. I am eager to get the ball rolling this fall and to serving this team to the best of my abilities."

"I'm excited to have Will become a member of our staff," said Smith. "He brings experience competing in the Big South and the region as well. I look forward to working with Will on elevating the level in our players and the program."
During Clark's first season as an assistant with UNC Asheville, he helped revive the program under coach McNab. The Bulldogs went 5-5 in the Big South, which gave the team their most wins in conference since 2006.

Prior to his stint at Asheville, Clark served as an assistant coach for the women's soccer program at Wofford College during the 2020-2021 season. At Wofford, He was primarily tasked with coaching the goalkeepers, defense, and coordinating travel logistics.

Clark started his collegiate coaching career as the assistant coach at Texas Southern University. During his time at TSU, the team amassed a 5-4-1 in conference record and finished the conference season in sixth place. The Tigers lost in the first round of the SWAC tournament after 13 rounds of penalty kicks. Clark was the director of camps, assisted in recruiting, and was responsible for goalkeeper development.

The coaching career for Clark began in his hometown of Brighton, Michigan. In 2018 he was a volunteer assistant at Brighton High School, coaching youth teams at MI Legends FC, working college camps and working on his licenses. Clark currently holds the USSF "C" and will pursue the USSF "B" in 2023.

Clark played soccer at University of North Carolina Wilmington and for Michigan's Vardar DA soccer club. He graduated from Western Carolina University in 2022 with a Masters in Sport Management and from UNCW in 2017 with a Bachelor of Science in Business Administration. Will and his wife Jennifer reside in Rock Hill.